Posted on May 2, 2018 by alwaystimetoprocraftinate

Oops… I didn’t take pics of anything but the finished shirt, but this is much better than the first time I tried screen printing.

I found a better DIY! I still used an embroidery hoop, but this time scrap organza fabric instead of the nylon. (but If I need more “screen” fabric at any time I will probably get a cheap sheer curtain I saw one at Family Dollar for $5) I also used puff paint instead of acrylic paint, as well as a plastic putty knife (also from Family Dollar for $2 for 3) instead of brushing it on. and instead of the glue/puff paint to block where I didn’t want paint I used a adhesive vinyl sticker I cut with my machine. (if it would tolerated the heat I would have used HTV)

I did a ombre effect which a pro screen printer would probably have multiple screens for I swiped white from the top and orange from the bottom. when the paint overlapped it gave the effect of a ombre. 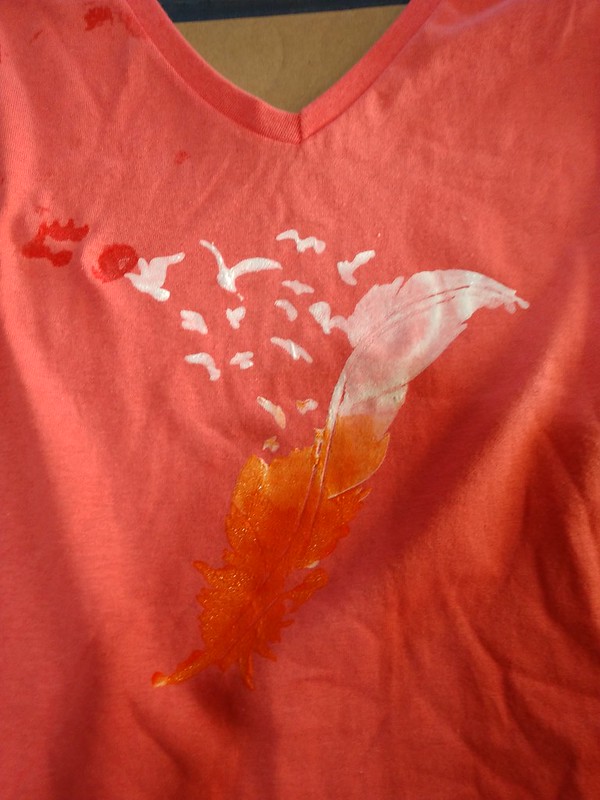 There are 2 things I would have changed about this. I would have used a darker shade of the same color as the shirt, and it wouldn’t have bled under the sticker. (which wasn’t lying compleatly flat in some spots.)

Next time I make a screen for printing I will use acrlyic tube paint or actual screen print paint.

I am a homemaker that loves to start but now always finish project. I have been married 11 years, with 2 children that will both be in school this year.
View all posts by alwaystimetoprocraftinate →
This entry was posted in Budget, Craft, crafts, crafts., cutting machine, diy, Uncategorized and tagged adhesive vinyl, cutting machine, diy screen print, embroidery hoop, f, family dollar, glue, htv, nylon, puff paint, scrap organza fabric, sheer curtain. Bookmark the permalink.